The Union of Agricultural Cooperatives (EAS) of Naxos island, in Cyclades, brings to our table fine products rich in taste that meet the highest quality standards and are produced on constant traditional values! 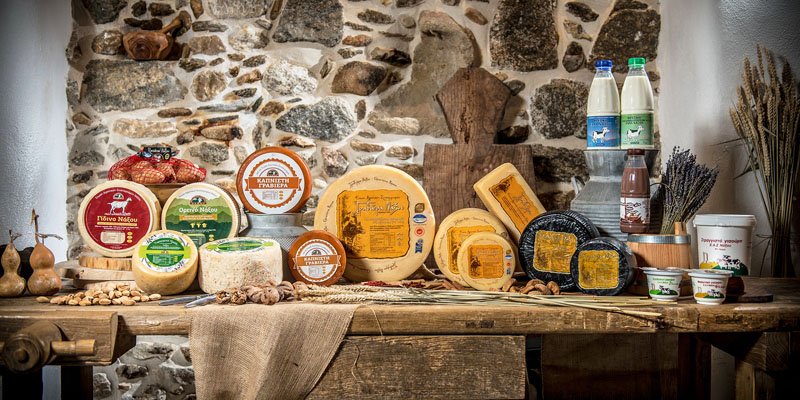 The Union of Agricultural Cooperatives of Naxos was founded in 1926 by a small group of producers of the island to support their activities and to make cheese from small amounts of milk. Since then and until today, with its operation and actions and always through the idea of cooperation, it has grown rapidly, increasing its production and product range and modernizing its facilities but always maintaining its commitment to quality and traditional values.

The Union produces a wide range of cheeses and other dairy products from fresh, pasteurized local milk, with its top and most famous and decorated product being the Graviera Naxou P.D.O. cheese. In addition, it produces the Patata Naxou (Naxos Potato) P.G.I., a product of great nutritional value and excellent taste that has played an important role in the history and development of both the island and the Union of Agricultural Cooperatives of Naxos itself. Patata Naxou is produced mainly in the lowland coastal fields of Naxos with use of traditional ways of fertilization. In addition, the Union produces potato seed, to ensure the quality of the next crops.

Graviera Naxou P.D.O. (Protected Destination of Origin) is, without a doubt, the flagship of the production and the greatest pride of the Union of Agricultural Cooperatives of Naxos! 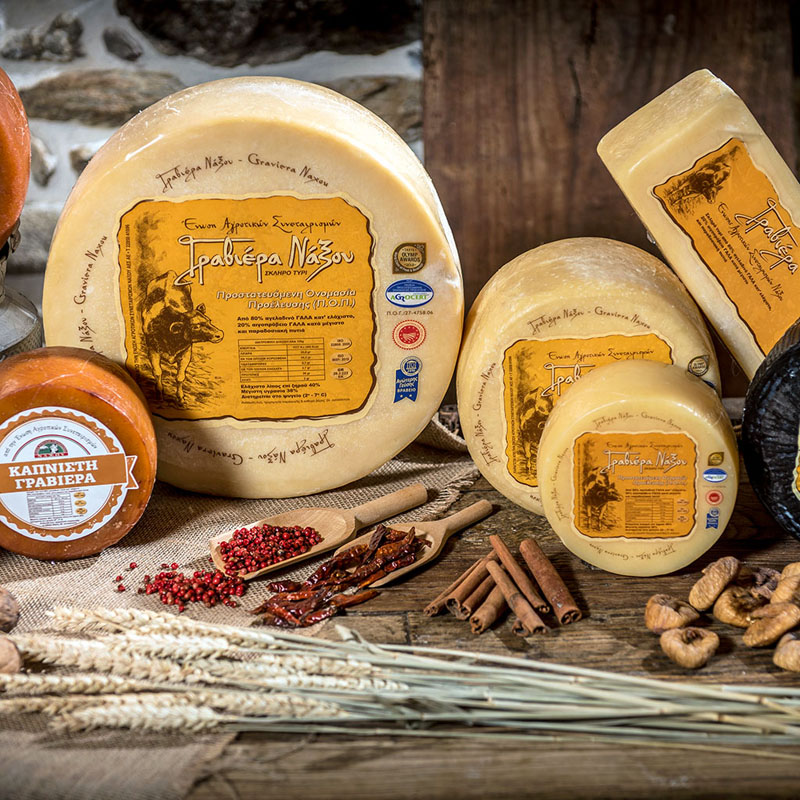 This hard cheese has golden yellow colour and thin dry skin on the outside and solid elastic mass and scattered small holes on the inside. Also, it has fine aroma, sweet and delicate taste and a characteristic aftertaste. Moreover, it has gained reputation as one of the two main products of the island (the other one is Patata Naxou –Naxos potato– P.G.I.) and also one of the finest Greek cheeses, while it can be used as a table cheese, for rubbing, for saganaki and in many other ways.

One other of Graviera Naxou P.D.O.’s qualities is that it is rich in calcium (eleven kilos of milk are used to produce one kilo of cheese) and it has been characterized by many scientists and institutes as one of the most appropriate cheeses for consumption by young ages, as it provides valuable help to their growth. Graviera Naxou P.D.O. is produced from 80% cow milk at minimum and 20% sheep and goat milk at maximum, with the addition of traditional rennet.

This fine cheese is made using milk exclusively from animals which live and have been bred on the island of Naxos, following the rules of traditional cheese making at all stages of the process; moreover, as it does in the production of all its other cheeses, E.A.S. Naxos strictly avoids addition of powder, preservatives, antibiotics and colour matters, condensation and milk concentrate.

E.A.S. Naxos’s Graviera Naxou P.D.O. has won domestic and international prizes, which, of course, are a further proof of its great quality.

Enjoy the Graviera Naxou P.D.O. in a tasty recipe for an amuse-bouche from the Union of Agricultural Cooperatives of Naxos: Croquette by Graviera Naxou PDO with mushroom cream

For more Information on the products of  the Union of Agricultural Cooperatives of Naxos and Contact, you can visit the website www.easnaxos.gr